This photo (Frame 133-H2) of the future Apollo 14 landing site was taken by Lunar Orbiter III on 20 February 1967 at an orbital altitude of 46.7 km. The resolution of the image is around 0.8 meters per pixel. The area covered by this image is 4.52167 x 5.77666 km.
Figure 1 shows the image unlabeled. In Figure 2 we have overlaid the EVA route upon this image so as to show where the crew set foot. While the crew were supposed to visit Cone crater they stopped 20 meters short of doing so due to some confusion as to their exact location. That said, they did visit some large rocks located adjacent to Cone crater’s rim. The enlargement of this Lunar Orbiter image clearly shows some large rocks poised near the crater’s rim. The inset photo shows the largest outcropping as photographed by the crew on the surface.
NOTE: We originally posted these files in an incorrect orientation. This was due to how the images originally show up when they are retrieved from the original tapes. Thanks to all of you eagle-eyed viewers we caught that. We have replaced those earlier files with ones that are correctly oriented to North, South, East, and West. 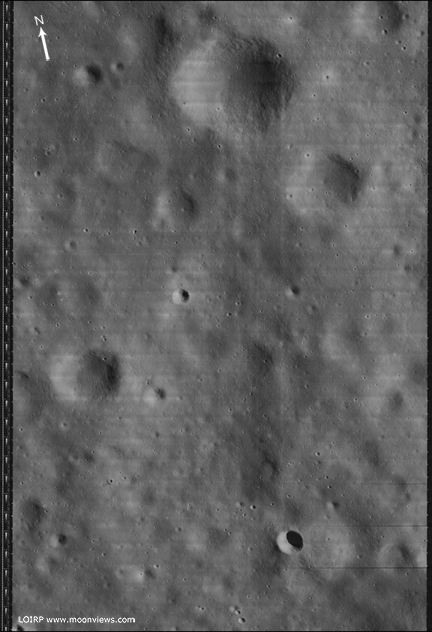 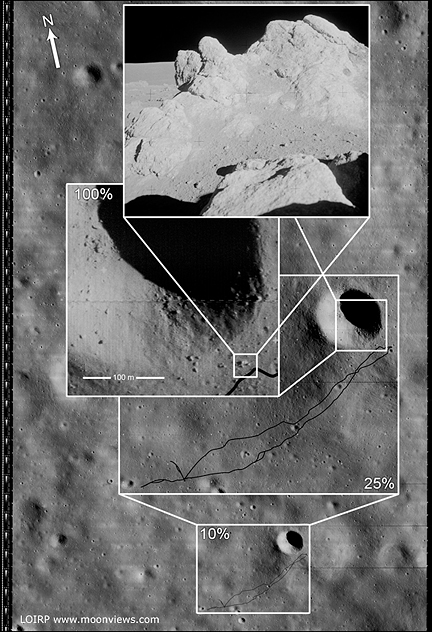 This image has been recovered in its original high resolution format from original Lunar Orbiter project data tapes using restored tape drive hardware and will eventually be submitted to the PDS (Planetary Data System). The full resolution is online here at NLSI.
LOIRP Note: We will be putting the full resolution version of this image on the NASA Lunar Science Institute website with the layers preserved for Photoshop for all you folks to have fun with! We only ask that you send us copies of what you do and credit us if you publish it anywhere.
For more information on the Lunar Orbiter Image Recovery Project (LOIRP) visit http://35.173.45.219
For information on NASA’s Lunar Science Institute visit http://lunarscience.arc.nasa.gov/
Related Links
Apollo 14 Surface Operations Overview
Apollo 14 Preliminary Science Report
Apollo 14 Mission Report
Apollo 14 Lunar Surface Journal