“Until more formal U.S. Government guidance is developed and perhaps a multilateral approach is developed to reflect various nations’ views on lunar hardware of scientific and historic value, NASA has assembled this document that contains the collected technical knowledge of its personnel – with advice from external experts and potential space-faring entities – and provides interim recommendations for lunar vehicle design and mission planning teams. As such, this document does not represent mandatory USG or international requirements; rather, it is offered to inform lunar spacecraft mission planners interested in helping preserve and protect lunar historic artifacts and potential science opportunities for future missions.”
Full report: NASA’s Recommendations to Space-Faring Entities: How to Protect and Preserve the Historic and Scientific Value of U.S. Government Lunar Artifacts

Scooping the Soviets, Paul Spudis
“The team at Jodrell Bank assumed that the mission was over, surmising that Luna 9 probably hit the Moon too hard or was designed as a crash lander. Then to their astonishment, the probe began transmitting radio signals and the observatory recorded them, uncertain as to their meaning. Lovell thought – suppose these signals were simply an ordinary telefax communication? If these transmissions were pictures of the lunar surface, perhaps the signals the observatory recorded could be read by a commercial facsimile machine. But Jodrell Bank Observatory had no such machine; the observatory was a scientific laboratory, which in those days displayed its received radio signals in the form of line graphs made by paper strip recorders.” 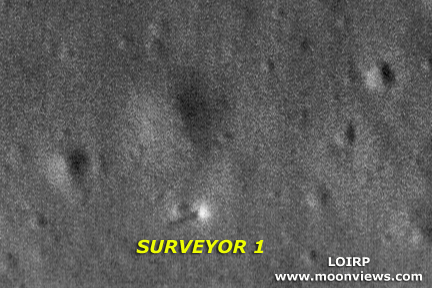 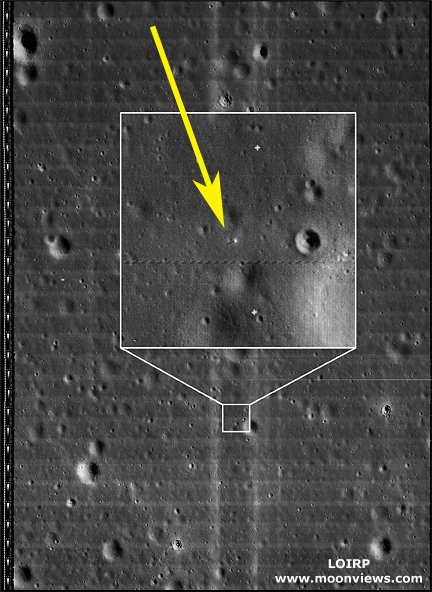 Larger view
This image has been recovered in its original high resolution format by LOIRP staff from original Lunar Orbiter project data tapes using restored tape drive hardware and will eventually be submitted to the PDS (Planetary Data System).
A full resolution version of this image will be placed online at the NASA Lunar Science Institute.
The Lunar Orbiter Image Recovery Project (LOIRP) is located at the NASA Ames Research Center in Moffett Field, CA. Funding and support for this project has been provided by NASA Exploration Systems Mission Directorate, NASA Innovative Partnerships Program, NASA Lunar Science Institute, NASA Ames Research Center, Odyssey Moon LLC, SkyCorp Inc., and SpaceRef Interactive Inc.
For more information on the Lunar Orbiter Image Recovery Project (LOIRP) visit http://35.173.45.219
For information on NASA’s Lunar Science Institute visit http://lunarscience.arc.nasa.gov/
For information on NASA’s Exploration Systems Mission Directorate visit http://www.nasa.gov/exploration/
Surveyor I: Location and Indentification, Science
Science 11 August 1967: Vol. 157 no. 3789 pp. 681-684
DOI: 10.1126/science.157.3789.681
L. Harold Spradley, R. Steinbacher, M. Grolier, C. Byrne
Surveyor I landed on the lunar surface on 2 June 1966 and obtained more than 11,000 pictures of the environment with its television camera. The same region was photographed by the 24-inch (61-centimeter) camera of Orbiter III on 22 February 1967. Surveyor I has been located in these Orbiter photographs; its image was found and all search and identification criteria were satisfied by the site.
Related Document
Lunar coordinates of Surveyor 1, Charles J. Byrne, 28 April 1967 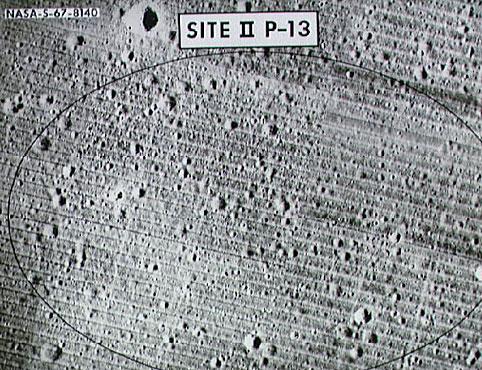 Ellipse II-P-13, located in Oceanus Procellarum. The center coordinates for the ellipse are 1 degree 40 minutes north longitude and 41 degrees 40 minutes west latitude. It was the thirteenth and last primary site photographed by Lunar Orbiter II. It is the western most of the Set C Mission I sites. 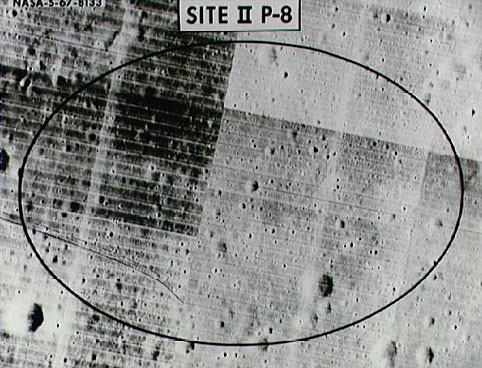 Ellipse II-P-8, located in Sinus Medii near the center of the moon. The center coordinates for the ellipse are 0 degrees 25 minutes north longitude and 1 degree 20 minutes west latitude. It was the eighth primary site photographed by Lunar Orbiter II. Surveyor VI landed approximately five kilometers to the northwest from the center of the ellipse.