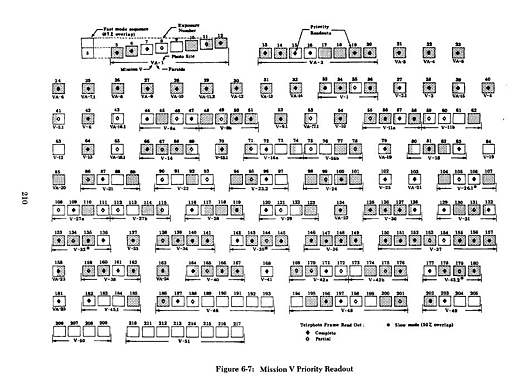 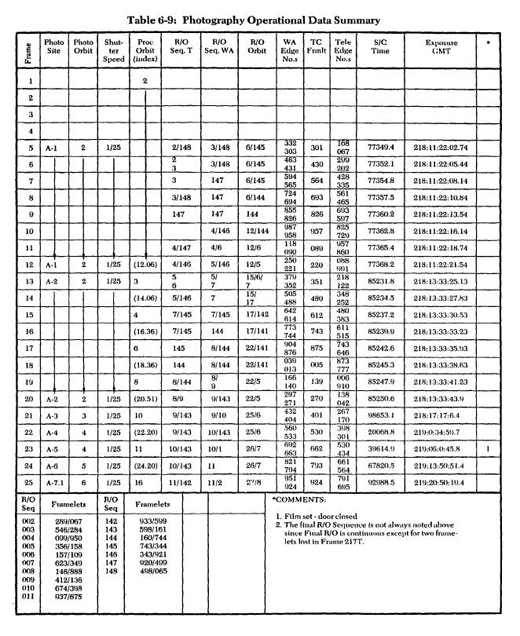 Dennis Wingo: Several people were interested in our process yesterday so here is some more information on what we do to figure out the images on the tapes. [Click on image to enlarge].
We almost always start with the low numbered tapes and go up, just like in the real mission. As stated yesterday, we picked Woomera because it had the most ground station time. There is 163 tapes for the Woomera LO-V, more than 50-60 tapes than for the previous LO’s. We think that there is some duplication there but we won’t know until we get all of the Woomera tapes done, then process the raw framelets. Austin then generates a report based upon our knowledge of all of the framelets for LO-V, which then tells us what we have left to do. We then will start on the Goldstone tapes.

END_OF_DOCUMENT_TOKEN_TO_BE_REPLACED

Dennis Wingo: This is a two minute video that shows, about every 42 seconds, a shift in the video. This occurs when the line is scanned to the end of a framelet, over the calibration features that were pre recorded in the tape. Keith has posted images here that show the relationship between the scope trace and the dynamic range of the tapes. This gives us a qualitative measure of the performance of the tape drive. Even in its sub optimized state today, the scope trace almost exactly matches the original transfer function of the spacecraft film, thus giving us a means to evaluate the quality of the analog data derived from the tape. 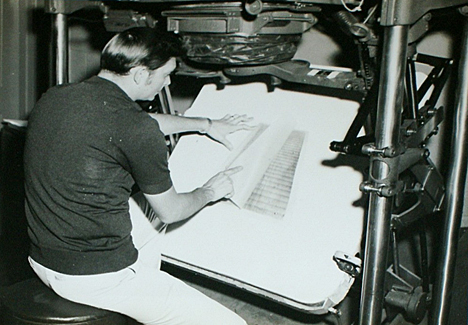 Original caption: St. Louis, Mo. — RECTIFYING A LUNAR PHOTO — Mr. Ralph Wilson of the U.S. Air Force Aeronautical Chart and Information Center uses photographic equipment to rectify a composite of Lunar Orbiter Photos. Rectification is accomplished by tilting the composite on the easel until the crater and other features can be photographed at a predetermined angle. (U.S. Air Force Photo).

Keith Cowing: I found this photo on eBay. As you can see it was warped. So I used Photoshop to do a quick “rectification” so as to present the photo as it would have looked if it was laid flat. Back in the Lunar Orbiter days they did not have Photoshop – so they had to use this mechanical / optical process – one that had a clear military heritage.
Click on top image to enlarge. 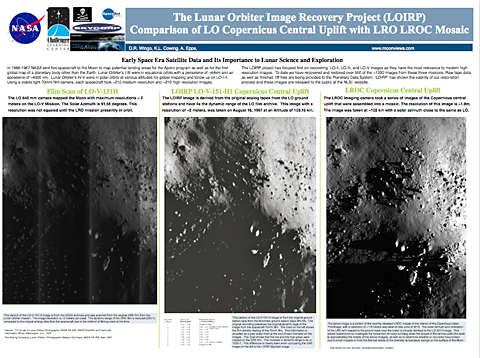 Subtly Shaded Map of the Moon Reveals Titanium Treasure Troves
“A map of the Moon combining observations in visible and ultraviolet wavelengths shows a treasure trove of areas rich in titanium ores. Not only is titanium a valuable element, it is key to helping scientists unravel the mysteries of the Moon’s interior. Mark Robinson and Brett Denevi will be presenting the results from the Lunar Reconnaissance Orbiter mission today at the joint meeting of the European Planetary Science Congress and the American Astronomical Society’s Division for Planetary Sciences.” 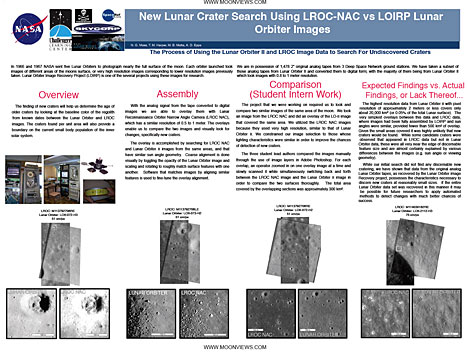 Click on image for PDF version of poster
Poster presented at the 42nd Lunar and Planetary Science Conference by N. G. Moss, T. M. Harper, M. B. Motta, A. D. Epps
“While some candidate craters were observed that appeared in LROC data but not in Lunar Orbiter data, these were all very near the edge of discernable feature size and are almost certainly explained by various differences between the images (e.g. sun angle or viewing geometry). While our initial search did not find any discernable new cratering, we have shown that data from the original analog Lunar Orbiter tapes, as recovered by the Lunar Orbiter Image Recovery project, possesses the characteristics necessary to discern new craters at reasonably small sizes. If the entire Lunar Orbiter data set was recovered in this manner it may be possible for future researchers to apply automated methods to detect changes with much better chances of success.”

“Keith Cowing talks about the kind of hacks made famous by the Apollo 13 mission, instances where the crew had to improvise using materials at hand. He discusses the following: Skylab Rescue – the umbrella used to replace solar insulation and boating tools bought at a local marina; Syncom Rescue – tools made out of plastic and duct tape; Apollo 13 CO2 removal, use of LEM engine, etc.; Apollo lunar rover fender repair; STS-120 EVA solar panel repair, and ISS camera tracker made from a power tool. Cowing also talks about some of his own projects including the greenhouse he designed and built on Devon Island (and some serious hacks) near the North Pole. Currently, he’s working in partnership with NASA Ames to restore a 1960’s era Titan I ICBM & convert it for educational use.”
More information: moonviews.com, nasahackerspace.org

Techno-Archaeology Rescues Climate Data from Early Satellites, National Snow and Ice Data Center
Image: Forty-three years after the Nimbus II satellite collected these data, a team from NSIDC and NASA recovered a global image from September 23, 1966. In this view over Antarctica, overlaid on Google Earth, the Ross Ice Shelf appears clearly at left.
“Starting with the methods developed for the Lunar Orbiter Image Recovery Project (LOIRP) at NASA Ames Research Park, a team at NSIDC worked with Dennis Wingo at LOIRP to search NASA archives for the original Nimbus tapes containing raw images and calibrations. Their first goal was to read and reprocess the data at a higher resolution, removing errors resulting from the limits of the original processing.”