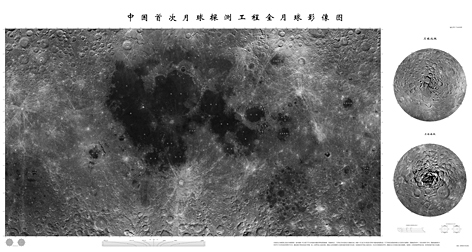 Lunar Photo of the Day
“With much fanfare NASA has re-released the earliest US image of the Earth as seen from the Moon. This Orbiter 1 image was originally released in 1966 when it was a unique, never before seen view that dramatically documented our new prowess in space. The recent re-release follows a long saga of saving and repairing the large 40 year old tape drives needed to read the massive tapes that record the data.”

Earthrise 1966, NASA Earth Observatory
“Long before man journeyed to the moon and looked back at the tiny, fragile planet that houses humanity, remote orbiters were sending back pictures of home. Sent to scope out potential landing sites on the Moon, the series of five Lunar Orbiters also sent back the earliest views of Earth from another celestial body. This image, taken in 1966 by Lunar Orbiter 1, is among the first views of Earth from the Moon. In the black-and-white image, a crescent Earth floats majestically behind the lumpy surface of the Moon. Though clouds swirl across the atmosphere, hiding nearly all identifying features on the surface beneath, the western edge of Africa is faintly visible in the upper left. The Earth’s North Pole points toward the top of the image.”

Moon photo goes high-def, Leader Post
“A little over 40 years ago, to help it select potential landing sites for its Apollo lunar missions, NASA sent five unmanned spacecraft over two years to orbit the moon and photograph pretty much every inch of its surface.”
NASA restores 42-yr-old image of Earth rising above the lunar surface, Entertainment and Showbiz
“The Lunar Orbiter Image Recovery Project, located at NASA’s Ames Research Center at Moffett Field, California, is taking analog data from original recorders used to store on tape and 1,500 of the original tapes, converting the data into digital form, and reconstructing the images.”

This video features a press Conference held at NASA Ames Research Center on 13 November 2008 where our first recovered Lunar Orbiter image was unveiled and discussed.

The Moon View, editorial, New York Times
“Last week, NASA released a newly restored image of a younger Earth. It was taken from Lunar Orbiter 1 in 1966, the first of several orbiters that helped gather data for the first moon landing in 1969. The photograph shows Earth just cresting the Moon’s curving horizon, the first picture of our planet framed by the surface of the Moon.
When the photograph was published, in 1966, it looked like a newsprint version of a high-contrast snapshot from space, a stark scattering of whites and blacks. The data from the lunar orbiter was stored on old analog tape drives. Now, imaging experts at NASA have digitized those drives — mining data that could not be recovered when they were first made — and produced a high-resolution version of that historic photograph.
The rough surface of the moon no longer looks starkly black and white. It has been rendered instead in a broad palette of grays, which give the moonscape a dimensional presence it never had in the photograph that first appeared. The cloud patterns that hide the surface of Earth, a crescent earth, are much more subtle.
What is most evocative is the awareness that this is our planet in 1966, which feels like a very long time ago. A train of thought immediately presents itself. If scientists can recover extensive new information from old electronic data, shouldn’t there be some way to peer beneath those clouds, back in time, and see how this planet looked when it had only half its current population?
It is probably not possible to say that one Earth is ever more innocent than another. And yet there is a feeling of innocence hanging over that beclouded planet, which was just about to get the first glimpse of itself from the Moon.”

The Earth As First Seen From The Moon, Editorial Photographer
“When I was young and the first photographs from our space missions began to appear, I was fasinated by their mystery and grace. Science fiction was one of my passions then. When the Whole Earth Catalog began to publish the used this imagery to capture out attention and it is really our generation that had been the first to witness such sights.”
Restored for posterity: The historic moment Earth was pictured from space for the first time, Daily Mail
“Later, clearer images would continue to inspire mankind, bringing back more and more images of Earth from space, but this is the one which captures the very second humanity gazed down on itself for the first time. And the image, showing the start of man’s achievements in space, was followed less than a fortnight later by a vision of man’s dreams for the future – when the first episode of Star Trek aired on September 8.”
This is why I get a kick out of archiving!, Serendipityoucity
“These lunar images and the later great blue ball images sparked a whole new way for us to see ourselves, to think of a borderless world, to imagine ourselves in space, to think about transboudary environmental issues, and most importantly reminded us that we are all in this together.”
Stuff on the Web: NASA goes back to the future, 4P Photoblog
“That NASA is restoring these images makes a lot of sense to me. They should contain quite a bit of information that will be crucial to the current Lunar program. The quality of the images though looks to be astonishing, and is a credit to the original designers of the Lunar Orbiters.”
Endeavour Update; Low Power Plan For Spirit, Astronomy Weather Blog, AccuWeather.com
“I have a profound interest in photography, so when I read about how NASA had restored a 42-year old image, I had to share the story! There is a great picture that was taken by the Lunar Orbiter 1 in 1966 that depicts Earth rising above the lunar surface. Modern digital technology has allowed NASA to produce the image at much higher resolutions. In the 1960s, limited technology of the day prevented the full, true resolution of the images from being available as they were captured on large magnetic types and transferred to photographic film.”

Restored: First Image of the Earth from the Moon:
“Explanation: Pictured above is the first image ever taken of the Earth from the Moon. The image was taken in 1966 by Lunar Orbiter 1 and heralded by then-journalists as the Image of the Century. It was taken about two years before the Apollo 8 crew snapped its more famous color cousin. Recently, modern technology has allowed the recovery of higher resolution images from old data sources such as Lunar Orbiter tapes than ever before. Specifically, recovery of the above image was initiated 20 years ago by Nancy Evans, and completed recently by Dennis Wingo and Keith Cowing who lead the Lunar Orbiter Image Recovery Project. Lunar Orbiter Image Recovery Project. Images like that above carry more than aesthetic value — comparison to recent high definition images of the Moon enables investigations into how the Moon has been changing.”

Note: The LOIRP segment starts at 2:14

This is the picture of moon’s surface taken from lunar orbit by Chandrayaan-1 spacecraft’s Terrain Mapping Camera (TMC) on November 15, 2008. Taken over the polar region of the moon, the picture shows many large and numerous small craters. The bright terrain on the lower left is the rim of 117 km wide Moretus crater. More