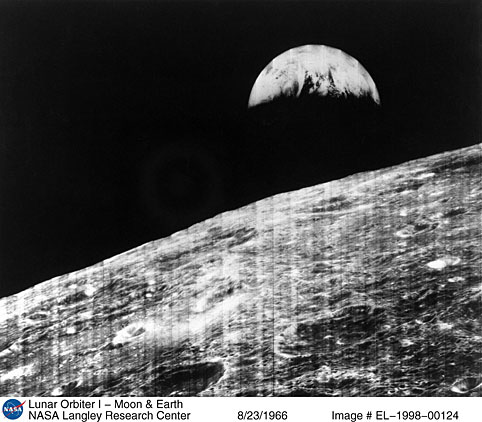 Boeing team members to recount 1966 “picture of the century”, Seattle Times
“On the wall above Ron Kaufman’s desk is a large framed black-and-white photo once labeled “the picture of the century.” Shot on Aug. 23, 1966, some 232,000 miles from Earth, it is the first photo taken of our planet as seen from deep space. It shows the moon in the foreground, and, in the distance, Earth, half-illuminated by the sun. Other photos, such as the famous Apollo 8 color picture taken in 1968 of Earth rising beyond the moon’s horizon, have also been labeled pictures of the century. But there is no denying the importance of that first black-and-white photo, even though it is of considerably lower quality, assembled from 60 separate strips of 35-mm film as it was transmitted back to Earth.”