NASA Asks International Astronomical Union to Name Lunar Crater After Mike Wargo
“NASA is asking the International Astronomical Union to name a crater on the moon in his honor “so his name will be forever enshrined in the heavens.”
– NASA Lunar Exploration Analysis Group Statement on the Passing of Dr. Michael Wargo, earlier post
– Mike Wargo, earlier post

NASA’s Lunar Reconnaissance Orbiter, or LRO, mission is sponsoring a series of workshops for educators of students in grades 6-12. These workshops will focus on lunar science, exploration and how our understanding of the moon is evolving with the new data from current and recent lunar missions.
The Lunar Reconnaissance Orbiter has allowed scientists to measure the coldest known place in the solar system, map the surface of the moon in unprecedented detail and accuracy, find evidence of recent lunar geologic activity, characterize the radiation environment around the moon and its potential effects on future lunar explorers and much, much more!
Workshop participants will learn about these and other recent discoveries, reinforce their understanding of lunar science concepts, interact with lunar scientists and engineers, work with real LRO data and learn how to bring these data and information to their students using hands-on activities aligned with local, state and national standards. Laptops are strongly encouraged for those participating in this workshop.
Workshops will take place in the following locations:
— June 20-24, 2011 — Herrett Center for Arts and Science, Twin Falls, Idaho
— June 27-July 1, 2011 — Hinds Community College, Utica Campus, Utica, Miss.
— June 27-July 1, 2011 — McAuliffe-Shepard Discovery Center, Concord, N.H.
— July 25-29, 2011 — John Hopkins University Applied Physics Laboratory, Laurel, Md.
— Aug. 1-5, 2011 — Arizona State University, Tempe, Ariz.
Applications for three workshops are due April 1, 2011. Applications for other workshops are due at a later date. For more information and to register for the workshops, visit http://lunar.gsfc.nasa.gov/lwe/index.html. Questions about these workshops should be directed to Andrea.J.Jones@nasa.gov. 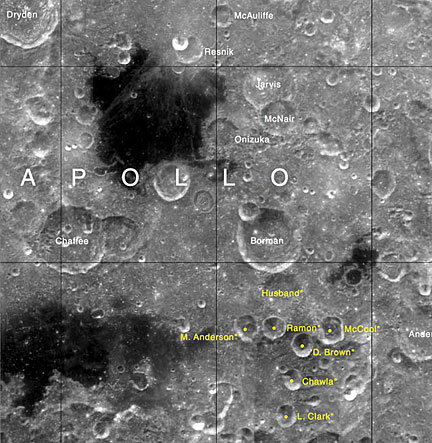 Names for seven craters in the Apollo basin on the Moon have been provisionally approved by the International Astronomical Union to honor the seven Space Shuttle Columbia astronauts. The names can be seen in the list of lunar crater names in the Gazetteer of Planetary Nomenclature.
The names are: Husband, McCool, Chawla, L. Clark, M. Anderson, D. Brown, Ramon.
Note that first initials have been used for Anderson, Brown, and Clark to distingiush them from other crater names on the Moon which honor persons with the same surnames. [Larger image] (source: USGS Astrogeology Center) 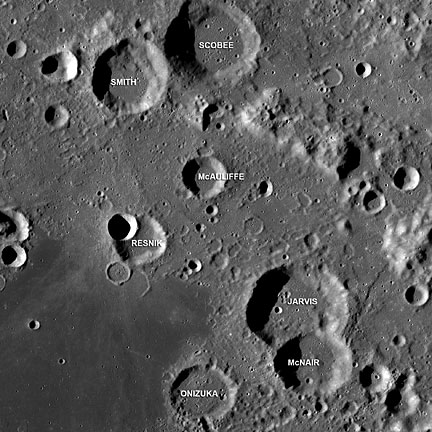 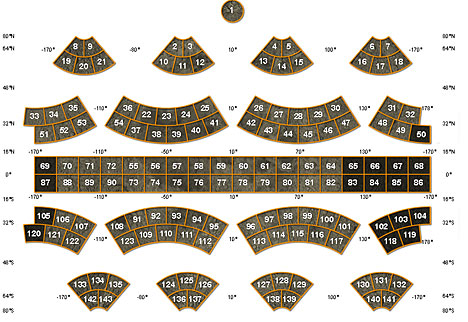 National Archives: “This film summarizes the exploration of the Moon conducted through unmanned Ranger, Surveyor and Lunar Orbiter spacecraft, and shows how such detailed data and photography contributed to the first manned flights to the Moon. The film describes the complexities of closeup photography of the Moon, and includes good views of craters, mountain ranges and other lunar terrain. This film received the following awards: Golden Eagle Certificate, Council on International Nontheatrical Events (CINE), 1968; and the Award of Merit, American Film Festival, 1968.”
Transcript below

END_OF_DOCUMENT_TOKEN_TO_BE_REPLACED

NASA Invites Public to Take Virtual Walk On The Moon
“More than 37 years after humans last walked on the moon, planetary scientists are inviting members of the public to return to the lunar surface as “virtual astronauts” to help answer important scientific questions. No spacesuit or rocket ship is required – all visitors need to do is go to www.moonzoo.org and be among the first to see the lunar surface in unprecedented detail. New high-resolution images, taken by NASA’s Lunar Reconnaissance Orbiter Camera (LROC), offer exciting clues to unveil or reveal the history of the moon and our solar system.”