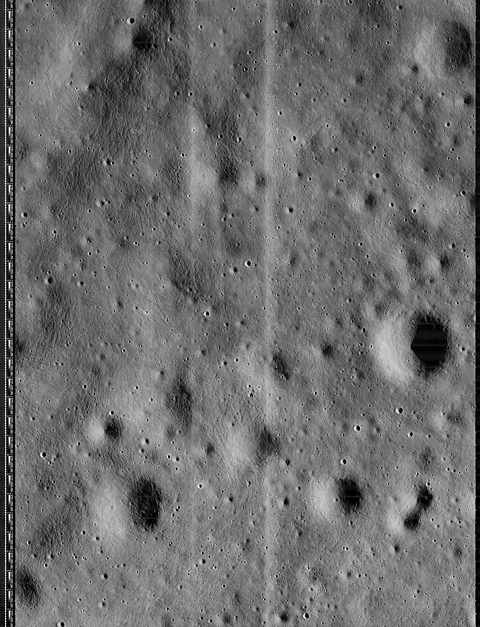 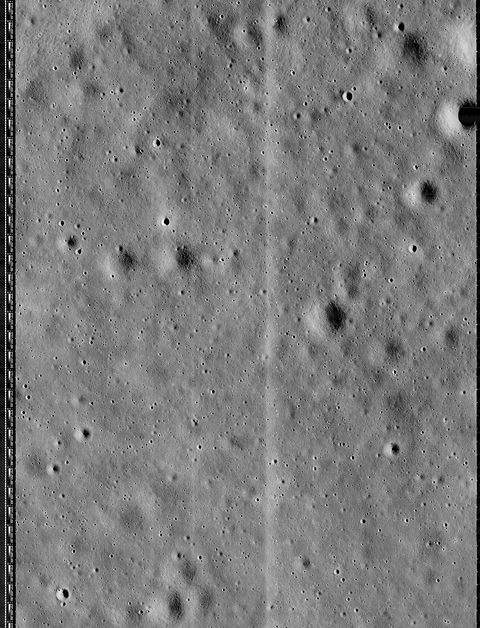 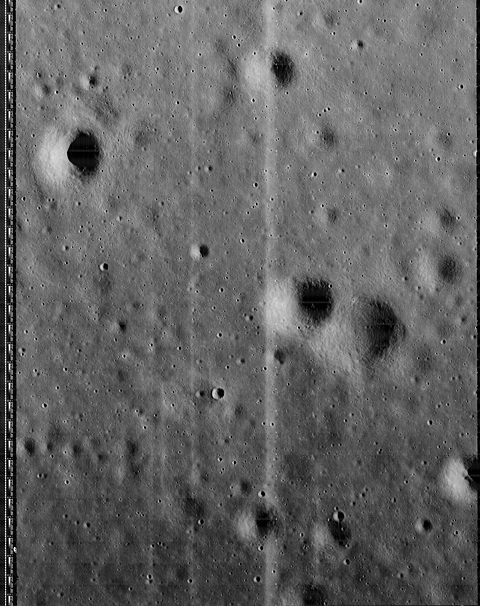 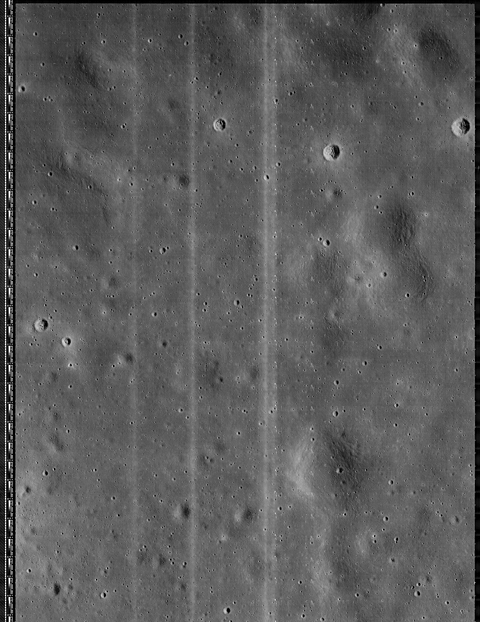 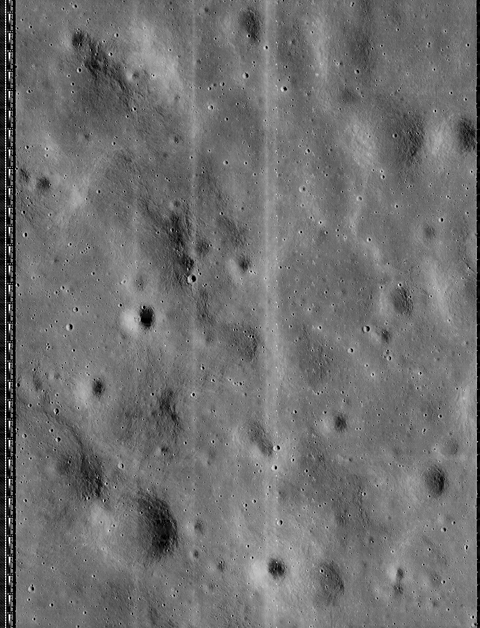 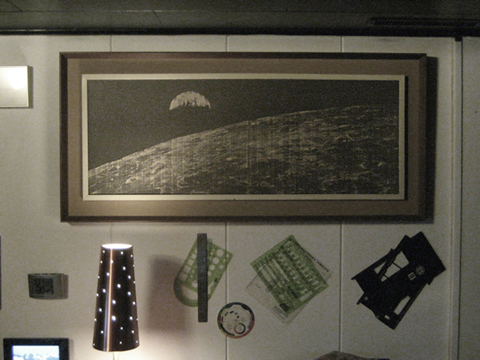 “I saw that you had posted some Lunar Orbiter I presentation pieces. I own one of them, but until recently didn’t know much about it. In researching the picture, I learned about the story of the tapes. Here is the one that I received in 1984-85 from a nice lady I worked with at the time. It doesn’t have a plaque, or dedication, but seems framed for an executives office. Her husband worked on the project, and this was in his office. He had passed away, and she brought it to work and gave it to me as a gift. She knew I was a big space flight fan and had just got back from a shuttle launch a couple of months back, and figured I would give it a good home. I wished I would have asked more questions at the time, but I was just so surprised by it. This was in Denver, and we were both working at an Ampex sub-contractor at the time.
The picture currently resides in my editing room in my studio/office. Since it is the anniversary of the photo, I snapped a quick pic of it for my facebook page, and thought I’d drop you a note while I was at it. BTW, I love the story of the LOIRP, since I have a fondness for old gear, and technology. I also like the Colorado connection with the video magnetics guys, we were regular customers back in the day. Keep up the good work. I know everyone is all hyped up on Mars, but as a child of the 60’s, I’m all about the moon.”
Scott Sheriff, Director, SST Digital Media
www.sstdigitalmedia.com

Keith’s note: 46 Years ago today, on 23 August 1966, Lunar Orbiter 1 snapped the first photo of Earth as seen from lunar orbit (Larger view). While a remarkable image at the time, the full resolution of the image was never retrieved from the data stored from the mission. In 2008, this earthrise image was restored by the Lunar Orbiter Image Recovery Project at NASA Ames Research Center. We obtained the original data tapes from the mission (the last surviving set) and restored original FR-900 tape drives to operational condition using both 60s era parts and modern electronics. The following links provide background on the image, its restoration, and reactions to its release.
Here is a comparison of the full image in its original, familiar context (higher res)(print quality). You can download a 1.2 GB version from NASA here. Note: this is a very large file. 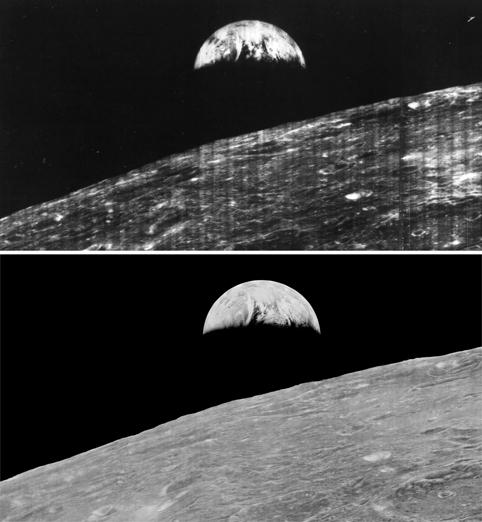 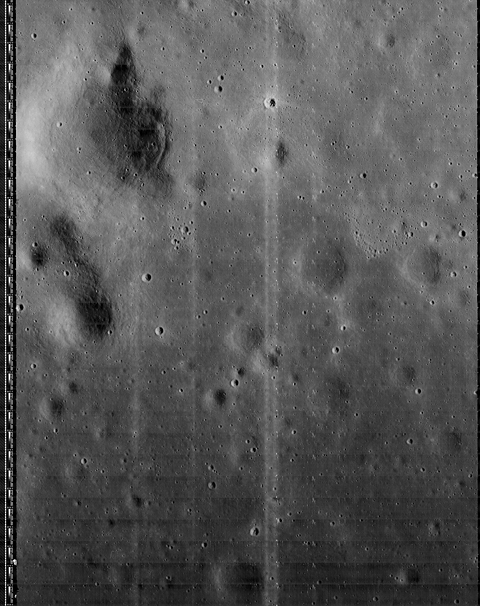 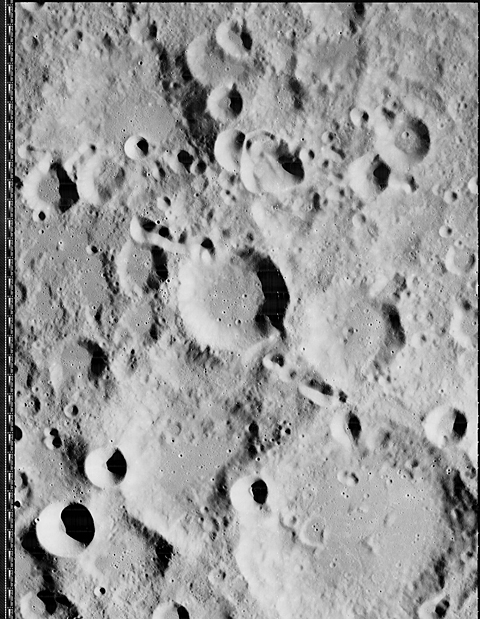 Dennis Wingo: Well today a milestone was reached in that we have now finsihed all 103 Madrid tapes for lunar orbiter III. Prior to this we had completed 79 Woomera tapes for LO-III since May. Additionally, we did seven Lunar Orbiter V tapes looking down into the Copernicus crater and adjacent areas. Today, just as a test we did a Lunar Orbiter III Goldstone tape. So, since May fifth we have digitized a total of 190 tapes.
We aren’t going to charge in and start doing Goldstone tapes right now. Neulyn Moss is putting together a spreadsheet that will show how many framelets (a lunar orbiter high resolution image has 96 framelets and a medium resolution image has 28 framelets) we have for each of the images from LOIII. The way the tapes were recorded, they did not begin and end at the beginning or end of an image. Thus we have many complete images but we also have lots and lots of partial images.

END_OF_DOCUMENT_TOKEN_TO_BE_REPLACED 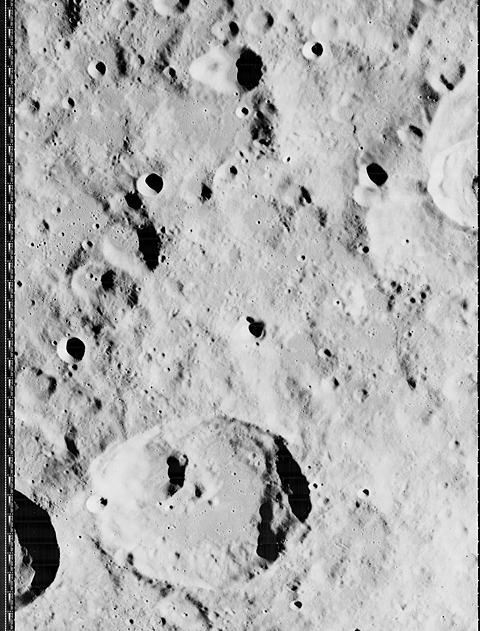