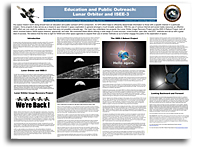 END_OF_DOCUMENT_TOKEN_TO_BE_REPLACED

The ISEE-3 Reboot Project is pleased to announce that our team has established two-way communication with the ISEE-3 spacecraft and has begun commanding it to perform specific functions. Over the coming days and weeks our team will make an assessment of the spacecraft’s overall health and refine the techniques required to fire its engines and bring it back to an orbit near Earth.
First Contact with ISEE-3 was achieved at the Arecibo Radio Observatory in Puerto Rico. We would not have been able to achieve this effort without the gracious assistance provided by the entire staff at Arecibo. In addition to the staff at Arecibo, our team included simultaneous listening and analysis support by AMSAT-DL at the Bochum Observatory in Germany, the Space Science Center at Morehead State University in Kentucky, and the SETI Institute’s Allen Telescope Array in California.
Of course this effort would not have been possible without the assistance of NASA and the Space Act Agreement crafted by NASA Headquarters, NASA Ames Research center, and the System Solar System Exploration Research Virtual Institute (SSERVI).
For further information on the ISEE-3 Reboot Project please visit our website at http://spacecollege.org/isee3 A much more detailed description of our First Contact efforts and future plans will be published on our website next week. 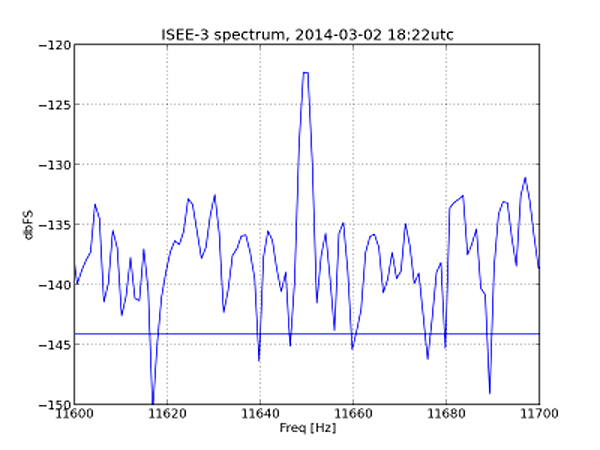 From the ISEE-3 Returns Facebook page: Communication involves speaking, listening and understanding what we hear. One of the main technical challenges the ISEE-3/ICE project has faced is determining whether we can speak, listen, and understand the spacecraft and whether the spacecraft can do the same for us. Several months of digging through old technical documents has led a group of NASA engineers to believe they will indeed be able to understand the stream of data coming from the spacecraft.
NASA’s Deep Space Network (DSN) can listen to the spacecraft, a test in 2008 proved that it was possible to pick up the transmitter carrier signal, but can we speak to the spacecraft? Can we tell the spacecraft to turn back on its thrusters and science instruments after decades of silence and perform the intricate ballet needed to send it back to where it can again monitor the Sun? The answer to that question appears to be no.
The transmitters of the Deep Space Network, the hardware to send signals out to the fleet of NASA spacecraft in deep space, no longer includes the equipment needed to talk to ISEE-3. These old-fashioned transmitters were removed in 1999. Could new transmitters be built? Yes, but it would be at a price no one is willing to spend. And we need to use the DSN because no other network of antennas in the US has the sensitivity to detect and transmit signals to the spacecraft at such a distance.
This effort has always been risky with a low probability of success and a near-zero budget. It is thanks to a small and dedicated group of scientists and engineers that we were able to get as far as we have. Thank you all very much.