NASA Scales Up 1966’s Moon Image to Amazing Ultra-High Resolution, Gizmodo
“When NASA released this image from their Lunar Orbiter 1 back in 1966, the first photograph ever of the Earth rising above the Moon’s surface, it was low resolution but they still amazed the world. This week, they have surprised every space aficionado re-releasing the same image in ultra-high definition. The cool part now is that NASA hasn’t used any upscaling or magical infinite zoom-in filter from CSI. Instead, they have created a new technology that uses refurbished analog machines and a new digital process that fully extracts the information stored in the program’s old magnetic tapes, something that was impossible to do in the 60s. Click on the image to watch it in its 3673 x 1740 pixel glory.”

Lunar Images From Chandrayaan-1
“This is the picture of moon’s surface taken from lunar orbit by Chandrayaan-1 spacecraft’s Terrain Mapping Camera (TMC) on November 15, 2008. Taken over the polar region of the moon, the picture shows many large and numerous small craters. The bright terrain on the lower left is the rim of 117 km wide Moretus crater.”

Repaired data drives restoring the Moon, Collectspace
“Still, it took some experimentation to understand how the data was organized and what was on the tape. “It was not unlike the scene from the movie ‘Contact’ where they think they have a video signal but they are not sure and they sort of monkey with the gear and they plug things in and they say, ‘Hey look! That’s a video signal’. As they play with it further they suddenly say, ‘Oh look, maybe we rotate it that way, flip the contrast,’ and they eventually find out they’ve got a video signal and they’re sitting there and playing with it and ‘Look, more data!’ and that’s how it happened,” described Cowing.”
Odyssey Moon Collaborates with NASA Funded Team Recovering Never Seen Before Detailed Images of the Moon
“In support of the project Odyssey Moon supported the salary of an intern who provided direct support to the project’s refurbishment of the original data tape drives. Odyssey Moon has also provided funding to the team to allow specific areas of the publicly released imagery to be enhanced for use in mission planning.”
Restoring the Moon: Lunar Orbiter Images Recovered, space.com
“Anyone who has used a copy machine to make a copy of a copy knows that resolution is lost in the process. The same was true for Lunar Orbiter, though for NASA, which needed quicker access to the data than computers of that day were able to provide, the resulting images would be what they needed to evaluate landing locations for Apollo.”
NASA restores 42-yr-old image of Earth rising above the lunar surface, Smash Hits, India
NASA goes back in time, IT Examiner, India
NASA releases digital version of iconic Earth image at Moffett Field, The Salinas Californian
NASA and LOIRP Return to the Moon, 42 Years Later. Recovering Lunar Orbiter Images, EDN
New views of the Moon – November 14, 2008, Nature

NASA unveils lunar image recovery project, CNet
“This project is an opportunity to revel in what was done in the past,” said Pete Worden, director of Ames Research Center, “and get excited about what we’re doing in the future.”
NASA swoons over rescued moons; decades-old lunar photos no longer lost in space, AP
“These photos will have some use, said Wingo’s partner, Keith Cowing, head of Spaceref Interactive, which runs space-themed Web sites. When NASA launches its next high-tech lunar probe in the spring, the space agency can compare detailed high-resolution images from 1966 to 2009 and see what changes occurred in 43 years, he said. “What this gives you is literally before and after photos,” Cowing said. “This is like a time machine.”
Rescued Moon Photos Restored to Unprecedented Detail, Universe Today
“Earlier this week we had a story about old data from the Apollo missions that could potentially be lost if an “antique” computer from the 1960’s can’t be renovated. But now comes good news about more old data which has actually been restored and enhanced to an exceedingly high quality.”
New pictures of the moon discovered (video), KGO
“It’s maybe the last place you might expect to resurrect history. There is an abandoned McDonalds near Moffett Field, with plenty of floor space for 1,894 video tapes. “We liken it to archeology. Techno-archeology,” said Dennis Wingo, an imaging expert.”

This video shows a Lunar Orbiter image framelet being retrieved from an original data tape using a restored FR-900 tape drive. Watch the monitor between the two tape drives as portions of the image (negative image) roll across the screen. This activity is part of the Lunar Orbiter Image Recovery Project (LOIRP) underway at NASA ARC.

This chart from the 1960’s shows the context of the newly restored Lunar Orbiter 1 image. This image was taken on 23 August 1966 and restored by the Lunar Orbiter Image Recovery Project at NASA Ames Research Center. The orientation of Earth was slightly off and shows a terminator about an hour off from what is actually in the image.Larger image. Credit: NASA/LOIRP

This graphic shows the actual orientation of Earth at the time the photo was taken. It was possible to match the outlines of north Africa in the newly restored image. Larger image. Credit: NASA/LOIRP

This graphic compares the enhanced resolution of the LOIRP image and the highest resolution image available online at LPI. AT full resolution shadows can be seem between clouds and the Earth’s surface at a resolution estimated to be around 1 kilometer per pixel. This image was taken on 23 August 1966 and restored by the Lunar Orbiter Image Recovery Project at NASA Ames Research Center. Larger image. Credit: NASA/LOIRP 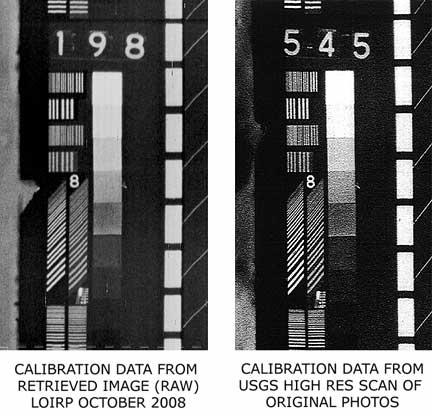 This graphic compares the enhanced resolution of the LOIRP image and the highest resolution image available online at LPI. This image was taken on 23 August 1966 and restored by the Lunar Orbiter Image Recovery Project at NASA Ames Research Center. Larger image. Credit: NASA/LOIRP

This graphic compares the enhanced resolution of the LOIRP image and the highest resolution image available online at LPI. Note the substantial increase in resolution with regard to the calibration marks at the bottom of this image. This image was taken on 23 August 1966 and restored by the Lunar Orbiter Image Recovery Project at NASA Ames Research Center. Larger image. Credit: NASA/LOIRP