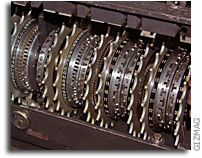 Historic Colossus computer marks 70th anniversary, Gizmag
“In 1994, Tony Sale, co-founder of the National Museum of Computing, started the effort to rebuild Colossus. Based on bits of information released by the government starting in the 1970s, eight photographs of the original machines, and surviving circuit diagrams kept by engineers, a team managed to reconstruct the computer, which went operational at the museum on November 15, 2007, and on March 6, 2012, became the centerpiece of the Colossus gallery, where it is a working exhibit.”