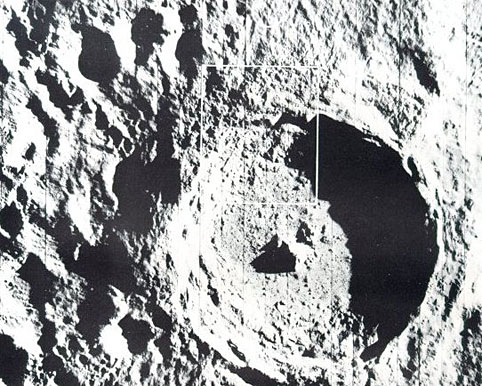 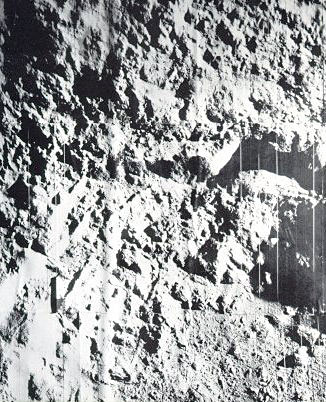 The Orbiter missions were designed to photograph all possible Apollo landing sites, to measure meteoroid flux around the Moon, and to determine the lunar gravity field precisely, from accurate tracking of the spacecraft. Orbiter did all these things – and more. As the primary objectives for Apollo program were essentially accomplished on completion of the third mission, the fourth and fifth missions were devoted largely to broader, scientific objectives – photography of the entire lunar nearside during Mission IV and photography of 36 areas of particular scientific interest on the near side during Mission V. In addition, 99 percent of the far side was photographed in more detail than Earth-based telescopes had previously photographed the front. 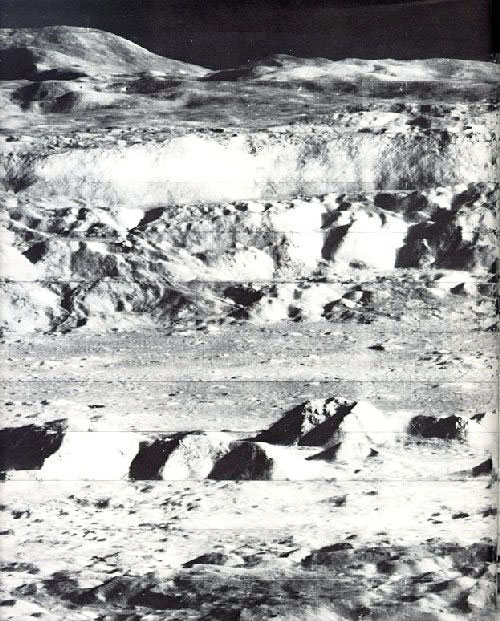 This breath-taking view was one of Lunar Orbiter II’s most captivating photographic achievements. For many people who had only seen an Earth-based telescopic view looking down into the crater Copernicus, this oblique view suddenly transformed that static lunar feature into a dramatic landscape with rolling mountains, sweeping palisades, and tumbling land-slides. The crater Copernicus is about 60 miles in diameter, 2 miles deep, with 3000-foot cliffs. Peaks near the center of the crater form a mountain range about 10 miles long and 2000 feet high. Lunar Orbiter II recorded this “picture of the year” on November 28, 1964, from 28.4 miles above the surface when it was about 150 miles due south of the crater.
The first Lunar Orbiter spacecraft was launched on August 10, 1966, and photographed nine primary and seven secondary sites that were candidates for Apollo landings. The medium-resolution pictures were of good quality, but a malfunction in the synchronization of the shutter caused loss of the high-resolution frames. In addition, some views of the far side and oblique views of the Earth and Moon were also taken (see here). When we made the suggestion of taking this “Earthrise” picture, Boeing’s project manager, Bob Helberg, reminded NASA that the spacecraft maneuver required constituted a risk that could jeopardize the company profit, which was tied to mission success. He then made the gutsy decision to go ahead anyway and we got this historic photograph. 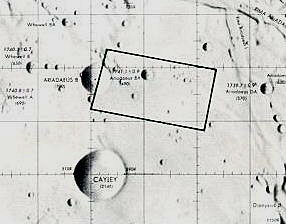 The best maps weren’t good enough, even though they were based an years of telescopic photography from Earth. In early planning, the rectangle in the map at left was a possibility os a landing site. The handful of craters shown, it was innocently thought, should be easy enough to dodge during the last moments of a piloted landing. The site was an 11- by 20-mile rectangle located in the highlands west of Mare Tranquillitatis. 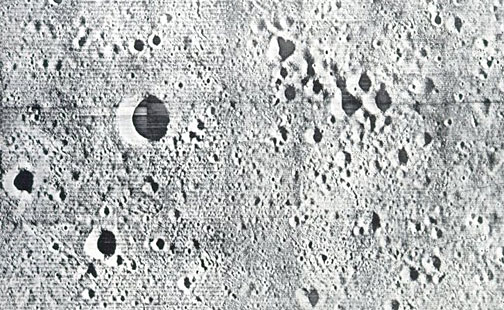 The truth about this site was revealed by the accurate eye of Lunar Orbiter II: it was far too rough to be attempted in an early manned landing. In fact, Orbiter pictures showed that parts of the Moon were as rough as a World War I battlefield, with craters within craters, and all parts of the surface tilled and pulverized by a rocky rain. No areas were found smooth enough to meet the original Apollo landing-site criteria, but a few approached it and the presence of a skilled pilot aboard the LM to perform last-minute corrections mode landings possible. The high-quality imagery returned by the Orbiters also returned a harvest of new scientific information.
The next two Lunar Orbiter missions were launched on November 6, 1966, and February 4, 1967. They provided excellent coverage of all 20 potential Apollo landing sites, additional coverage of the far side and other lunar features of scientific interest, and many oblique views of lunar terrain as it might be seen by an orbiting astronaut. One of these was a dramatic oblique photograph of the crater Copernicus, which NASA’s Associate Administrator, Dr. Robert C. Seamans, unveiled at a professional society conference in Boston and which drew a standing ovation and designation as “picture of the year”. Among the possible Apollo sites photographed by Orbiter III was the landing site of Surveyor I. Careful photographic detective work found the shining Surveyor and its dark shadow among the myriad craters.
The Apollo site surveys yielded surprises. Some sites that had looked promising in Earth-based photography were totally unacceptable. No sites were found to be as free of craters as had been originally specified for Apollo, so the Langley lunar landing facility was modified to give astronauts practice at crater dodging. Since the basic Apollo photographic requirements were essentially satisfied by the first three flights, the last two Orbiters launched on May 4 and August 1, 1967, were placed in high near-polar orbits from which they completed coverage of virtually the entire lunar surface.
The other Orbiter experiments were also productive. No unexpected levels of radiation or meteoroids were found to offer a threat to astronaut safety. Studies of the Orbiter motion, however, revealed relatively large gravitational variations due to buried mass concentrations – the phrase was soon telescoped to “mascons” – in the Moon’s interior. This alerted Apollo planners to account properly for mascon perturbations when calculating precise Apollo trajectories.
With the completion of the Ranger, Surveyor, and Orbiter programs, the job of automated spacecraft in scouting the way for Apollo was done. Our confidence was high that few unpleasant surprises would wait our Apollo astronauts on the lunar surface. The standard now passed from automated machinery to hands of flesh and blood.
THE SELECTION OF APOLLO LANDING SITES
The search for places for astronauts to land began with telescopic maps and other observations from the Earth, and Ranger Photos. The site-selection team considered landing constraints, potentials for scientific exploration, and options if a launch was delayed, which shifted chosen sites to the west. The team then designated a group of lunar areas as targets for Surveyors and Lunar Orbiters.
From the Orbiters’ medium-resolution photos, mosaics were made and searched for geologic and topographic features that could make a landing risky: roughness, hills, escarpments, craters, boulders, and steep slopes.
Navigation errors could cause an Apollo landing module to miss a target point up to 1.5 miles north or south and 2.5 miles east or west. So ellipses were drawn an the mosaics around possible target areas. Those ellipses represented 50, 90, and 100 percent dispersion possibilities. The surfaces within them were then examined to select the target points that appeared to be least hazardous.
Flight-path clearance problems were considered next. This is illustrated by drawing diverging lines eastward for 35 miles from the elliptical areas that otherwise looked best on the mosaics. 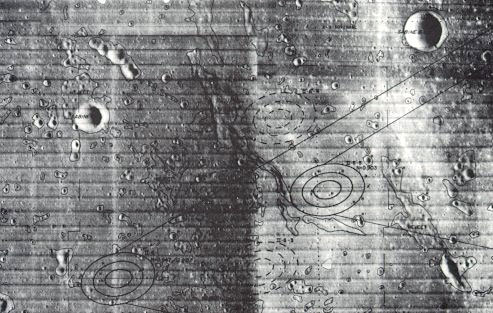 A typical marked mosaic is reproduced above. It is a view of a region in Mare Tranquillitatis, and the area within the set of ellipses at the far left was chosen as the target for the first manned landing. Before it was selected, high-resolution Orbiter Photos were used to examine details within the landing ellipses. In those Photos surface irregularities as small as 3 feet could be seen. One such mosaic is reproduced below. The black cross in a white circle marks the spot where the Apollo 11 astronauts’ landing module descended. It was in an elliptical target area only 200 feet wide. 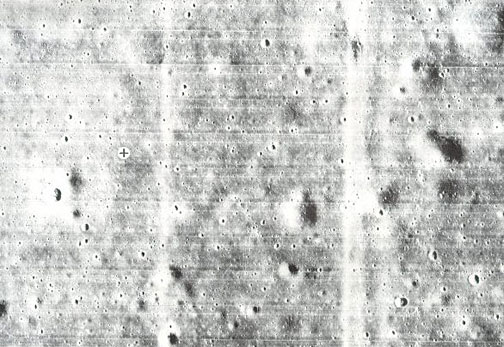 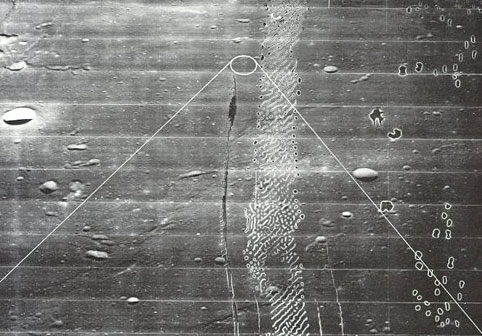 The picture above is an oblique view of the same area. This Lunar Orbiter photograph illustrates more nearly the way it would look to an astronaut descending to land. The white lines iridicate the elliptical target site and the approach boundaries. Processing flaws such as seen in this picture resulted occasionally from partial sticking of the moist bimat film development used aboard the Orbiter spacecraft.