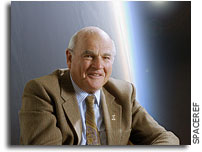 Baruch Blumberg Passes Away, David Morrison, SETI Institute
“I was privileged to have lunch with Barry the day he died. He was attending a conference at Ames discussing exploration planning and its relationships with science and education. He presented a paper on the value of citizen science, where thousands of ordinary people can contribute significantly to science while also enjoying themselves in working with real spacecraft data, such as the high-resolution images now being received from NASA’s Lunar Reconnaissance Orbiter.”
Baruch Samuel Blumberg 1925-2011, earlier post