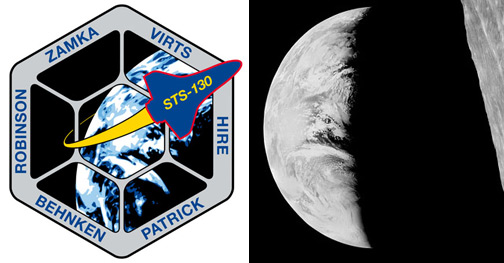 The STS-130 patch was designed by the crew to reflect both the objectives of the mission and its place in the history of human spaceflight. The main goal of the mission is to deliver Node 3 and the Cupola to the International Space Station (ISS). Node 3, named “Tranquility,” will contain life support systems enabling continued human presence in orbit aboard the ISS. The shape of the patch represents the Cupola, which is the windowed robotics viewing station, from which astronauts will have the opportunity not only to monitor a variety of ISS operations, but also to study our home planet.
The image of Earth depicted in the patch is the first photograph of the Earth taken from the moon by Lunar Orbiter I on August 23, 1966. As both a past and a future destination for explorers from the planet Earth, the moon is thus represented symbolically in the STS-130 patch.
The Space Shuttle Endeavour is pictured approaching the ISS, symbolizing the Space Shuttle’s role as the prime construction vehicle for the ISS. The NASA insignia design for shuttle flights is reserved for use by the astronauts and for other official use as the NASA Administrator may authorize. Public availability has been approved only in the form of illustrations by the various news media. When and if there is any change in this policy, which we do not anticipate, it will be publicly announced. STS130-S-001 (September 2009) — high res (1.5 M) low res (98 K)