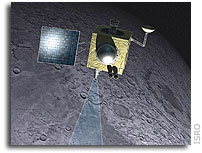 Radio contact with Chandrayaan-I spacecraft was abruptly lost at 0130 Hrs (IST) on August 29, 2009. Deep Space Network at Byalalu near Bangalore received the data from Chandrayaan-I during the previous orbit upto 0025 Hrs (IST). Detailed review of the Telemetry data received from the spacecraft is in progress and health of the spacecraft subsystems is being analysed. More