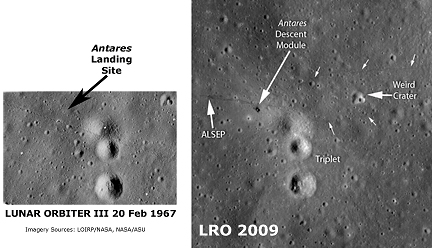 Yesterday the LRO team released a new image of the Apollo 14 landing site. You can clearly make out the paths that the crew walked as well as the location of the Apollo 14 Antares Lunar Module Descent Stage.
In June 2009 LOIRP issued its own view and analysis of this landing site – as seen by Lunar Orbiter III back in 1967.
Comparing our high resolution image of the site with that taken by LRO clearly shows no feature where Antares’ Descent Stage now stands [larger image]. While the resolution of the Lunar Orbiter image (0.8 meters/pixel) would probably not reveal astronaut tracks in great detail, we’re rather certain that it would have seen an object the size of Antares’ Descent Stage.
As such, we’re pretty certain that the Apollo 14 mission landed on the Moon!