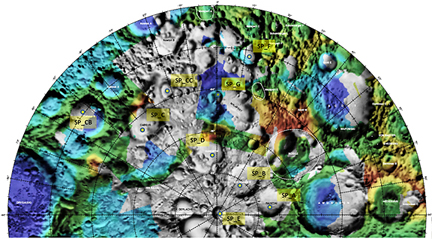 Sun Mask is the depth, in kilometers, of the crater below where the sun’s light does not penetrate. Earth mask is the depth of the crater below that is not visible from Earth. At various time of the year, the libration or wobble of the moon on its axis gives Earth obsevers the ability to look deeper into the permanenty shadowed craters on the south pole.
This list of candidate craters is based on current information about the age, depth and structure of the selected craters. Approximately 30 days before impact, the LCROSS science team will announce the selection of the final impact crater. The selection will take into account any additional information, especially from the Lunar Reconnaissance Orbiter, collected about the candidate craters.