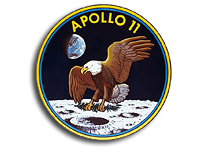 Moon Orbiter to Photograph Apollo 11 Landing Site, Space.com
“Taking the something old, something new approach is the Lunar Orbiter Image Recovery Project, located at the Ames Research Center in the heart of California’s Silicon Valley. This team effort is led by Dennis Wingo of SkyCorp, Inc. in Huntsville, Alabama and Keith Cowing of SpaceRef Interactive, Inc. of Reston, Virginia.
The recovery project involves culling through some 1,700 images taken by NASA Lunar Orbiter missions from the 1960’s, convert that data into digital form and then reconstruct the images to yield 21st century pictures far superior than the originals.
Ideally, upgrading an old Lunar Orbiter image taken of the Apollo 11 landing zone before Armstrong and Aldrin set foot there, contrasted to a new LRO overhead shot, would present a unique before/after look-see of the historic Tranquility Base site, said Greg Schmidt, deputy director of the NASA Ames-based Lunar Science Institute.
The Apollo sites themselves are extremely well characterized thanks to human explorers dispatched to those individual locales, Schmidt noted. LRO images of these areas will let us see the landers — and likely other artifacts such as the lunar buggies used in the Apollo 15, 16, and 17 missions – all of which will no doubt be very powerful in ways beyond mere science, he said.”