“YouTube sensation Veritasium visits an abandoned McDonalds on the NASA Ames campus to reveal the first original lunar images, now being converted from film to digital media with the NASA LOIRP project. Watch the transformation of the original lunar Earth rise!”

Dennis Wingo: Status December 9, 2013
A bit of fun today. Been filling in the gap between W4-11 and W4-19 today with some images still foggy due to light getting into the camera system, not radiation as I first supposed (I still don’t know if I buy the explanation though).
During the recording of W4-17 I heard something that I had only heard once before on the tapes, a female voice. Here it is along with a bit more audio…
It takes several seconds for the audio to start in earnest and the female voice segment is short…
Crap, it won’t let me upload an mp3. Any suggestions? 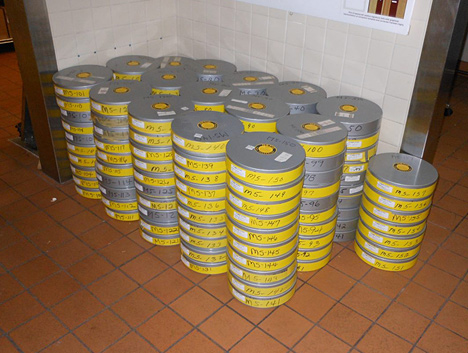 Dennis Wingo Status, Friday evening, December 6th 2013.
Well got some tapes done today after skipping into the 20’s. Am going backward and will figure everything out on Monday. We are as far as W4-028 but did not do 11-18, 23….
Should have it back on track Monday. Not bad though, should be more than half way through Woomera for LO-IV by next Friday.
Dennis Wingo Lunar Orbiter Status, mid day Friday December 6, 2013
Frustrating week. First, we can’t find, or it does not exist, the same table (Photography and Operational Data Summary) that we have for Lunar Orbiter II, III, and V. That makes it a LOT harder to identify the images per their sequence numbers.
Second, the first ten Woomera tapes had two very noisy images and the rest of the tapes had nothing on them. There are some vague references to radiation fogging but I just bet they did not want that kind of information out there in the 1960’s before the Apollo missions. As an FYI, if the November 1972 flare had happened during the Apollo 17 mission we would have had three crispy astronauts.
I jumped all the way to W4-28 and found images, but still with some film fogging. In looking at the LPI images there are some pretty big gaps. Will be interesting to see what our image captures show.
I have run W4-25-28 now and am running backward until I hit the blank images. It is also going to be a pain in the rear to identify the images but will get it done.

Dennis Wingo: Update Wednesday December 4, 2013
We have captured the framelets to complete LOV-115M from tape W5-122. We are capturing the frame lets that we missed before for image LOV-117H from tape W5-121. When this is through in a few minutes we will be complete with our Lunar Orbiter V image captures. On to Lunar Orbiter IV tomorrow!
Oh yes: Austin Epps says that we now have captured over 80,000 framelets!
Dennis Wingo: Status, Wednesday December 4, 2013
I have finished going over every image and tape to see if we have missed capturing anything. We found a tape (M5-110) that had a few frame lets that completed an image (LOV-119M) and a few images and frame lets not properly accounted for in the “book” that we have on tape. We have found one tape that I did not get all the frame lets that we needed off of, and one tape (both Woomera) with a single frame let that we need.
Will get the machine recallibrated for Woomera then get these frame lets and then hopefully tomorrow recalibrate and start running Woomera LOIV tapes!

Dennis WIngo: Status, end of day, December 2, 2013.
Today has been a marathon tape day. We started with M5-126 and made it al l the way through M5-150! Lots of not neededs and few frame let captures but we are now to the final day of image capture (from the ground station’s perspective) and we will complete through M5-158 tomorrow, good lord willing and the creek don’t rise as the old saying goes.
Will do the final listing after I finish the tapes tomorrow.
We will then go back and see what we have missed. I know of a couple of images that we mistakenly did not capture from Woomera. However, it is highly likely that by CoB Wednesday, we will have finished the Lunar Orbiter V captures. This mission had by far the most tapes and images. There are many really cool images that are NOT on the LPI website or the USGS. We look forward to providing these to the lunar science community…